The keto diet is one of the more effective eating plans out there if you are looking for a leaner and healthier body, higher energy levels, and more. However, do you know what the keto diet really entails?

When it comes down to it, it’s all about eating a lot of protein and fats. On the average keto diet, about 75% of your food should be protein, with roughly 20% being fat, and the remaining 5% being carbs.

Now, for those of you who like your carb-heavy foods, such as pasta, bread, fruits, and even some veggies, you might be wondering how much of what you can eat so that you won’t go over your daily carb limit.

First off, for most people, having 5% of your daily food intake being carbohydrates means that your carb intake limit for the day is going to be around 50 grams.

Now the problem is that you might not know exactly what 20 grams of carbs looks like. Let’s figure out what the keto diet allows you to eat so you don’t exceed that daily 50 gram carbohydrate limit. 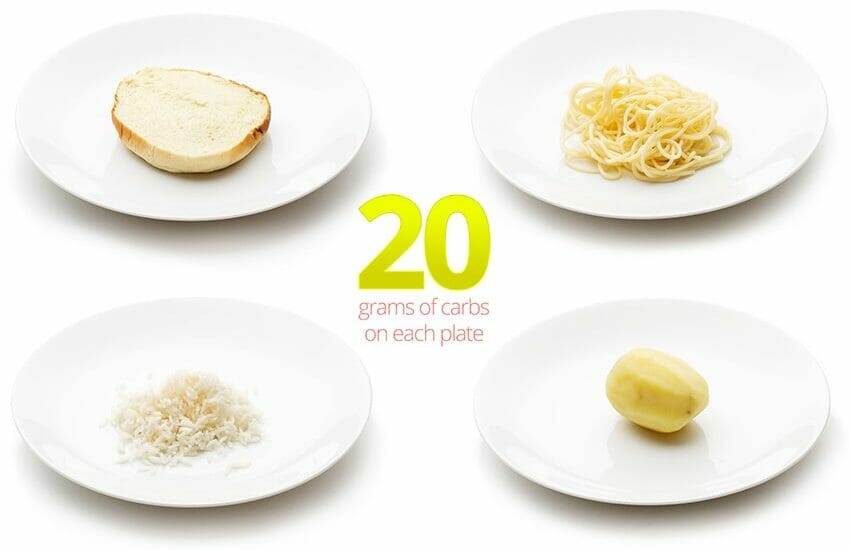 Before we get into talking about carb-light meals for the whole day, you might be interested in knowing what 20 grams of carbs looks like when it comes to individual foods.

As you are going to find out, a lot of foods contain a lot of carbs, which you may not have been expecting. Let’s go over some basic examples of what 20 grams of carbs looks like right now.

​Some Carb Light Mealtime Ideas from Dawn to Dusk

So you are on a keto diet and you can’t eat that many carbs. It might seem really difficult to eat the right types and amount of food per day, especially when divided up between 3 meals, so you don’t exceed the daily 50 gram limit.

Let’s take a look at a solid mealtime regiment, including breakfast, lunch dinner, and in-between snacks, which you can follow to stay within that 5% daily carb intake limit.

If you want to stay low on your carb intake for the day, you have to start with breakfast, but so you don’t run through your whole daily allowance, you want to stick with a super low-carb breakfast.

What does this look like? You could have scrambled eggs, bacon, and a piece of avocado, which only has a single gram of carbohydrate.

You could also mix up some low-carb pancakes using eggs, unsweetened almond milk, and coconut flour, combined with cooked ham, which only has 4 grams of carbs.

By the time you get to lunch, you should not have eaten more than 4 or 5 grams of carbs at most.

This will allow you to enjoy a decent lunch on the keto diet, one that has a few grams of carbs, but not too many.

For lunch you could eat something like tuna mixed with some onion and tomato for 4 grams of carbs.

Another good option is a chicken stir fry with 1 chicken breast, a cup of bok choy, a cup of broccoli, a half cup of bean sprouts, some sesame oil, ginger, and soy sauce, for a total of 5 grams of carbs.

If you want to get a decent amount of carbs into you, but you don’t want to eat meat, something like a cup of mixed greens with a half cup of chopped cucumber with a tablespoon of dressing will provide you with 5 grams of carbs for lunch.

Dinner time is usually when you will eat the most carbs, and this is fine, just as long as you remember that you should not exceed that 50 gram carb limit in a single day. Anywhere up to 6 or 7 grams of carbs for dinner is good.

So, what does this look like? A simple piece of grilled salmon with 1.5 cups of spinach and 2 tablespoons of almonds has only 4 grams of carbs.

You could go with some chicken wings — grilled not fried — and a cup of green beans, which has just 6 grams of carbs. If you want to cut out meat for dinner, some sliced eggplant and a quarter cup of ricotta, baked, topped with tomato slices and mozzarella, comes in at 5 grams of carbs.

One thing to note is that drinks like water and coffee are fine, but sodas and juices all have lots of carbs, so those are best avoided at all times.

For snacks, small amounts of veggies, eggs, and some fruits are acceptable, but do remember that many fruits come packed with carbs, so that is something to look out for.

Yes, it can be a bit difficult to maintain a low carb diet, especially when you are used to thinking that fruits and nuts are really healthy.

However, when it comes down to it, even fruits can have a lot of carbs, and of course, pasta and most breads are out of the question.

Meats, fats, and many vegetables are what you are going to be eating. Remember that 20 grams of carbs can look very different in appearance and quantity, depending on what the food itself is.

Previous Post How Long Does It Take To Start Losing Weight On Keto ?

Next Post Can You Have Honey On A Low Carb Diet ?

Scroll Up
We use cookies to ensure that we give you the best experience on our website. If you continue to use this site we will assume that you are happy with it.Ok